(32,000) service and condolence processions participated in the Ziyarat Arba’een, including (20) Arab and foreign processions. 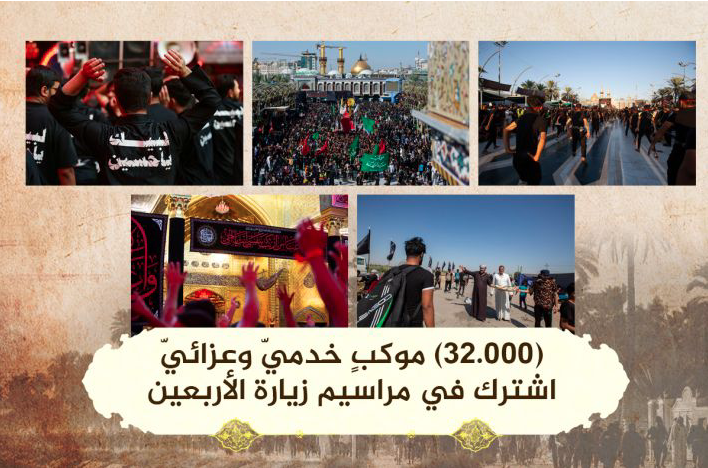 The Department of Rituals, Processions, and Hussayni Institutions in Iraq and the Islamic World of the Holy Shrines of Imam al-Hussayn and al-Abbas (peace be upon him), announced that the number of processions, both service and mourning, that participated in the Ziyarat Arba’een this year reached (32,000) processions (service and mourning) registered in the department’s database, including (20) Arab and foreign processions participated in mourning activities, and they were from: Pakistan, India, Saudi Arabia, Kuwait, Lebanon, Nigeria, Britain.

This is according to what was reported to the al-Kafeel Network, by Haj Riyad Nehme Al-Salman, head of the department, and he also stated: “The number of mourning processions (zinjeel and Latm) reached (973) processions from most of the Iraqi provinces, and there were (287) processions for the Zinjeel condolence and 686 processions of Latm, both of which participated for a period of four days.

He added: “The number of service processions that have participated in providing services to the visitors, from the farthest point the visitors took to the holy Karbala is (32,027) processions through the provision of food and drinks, the provision of accommodation and other service matters, in addition to medical and treatment services as a result of the repercussions of the spread of the Corona epidemic, including (10,350) processions that provided its services within the administrative borders of the Karbala governorate from the governorate’s processions and the rest of the other provinces, in addition to processions and hussainiyats, in addition to houses estimated in the hundreds that were not registered in our department’s databases.

He pointed out: “The Arab and foreign processions for this year have been limited to the condolence side, due to the limited number of people allowed to enter Iraq, as a result of the Corona epidemic and also because of their late arrival.”

“The department has previously documented these processions and issued IDs and guarantees, which are considered a feature of participating in these ceremonies, whether they are mourning or service processions, and it deployed its staffs and the volunteers to organize their work and the flow of their movement.”