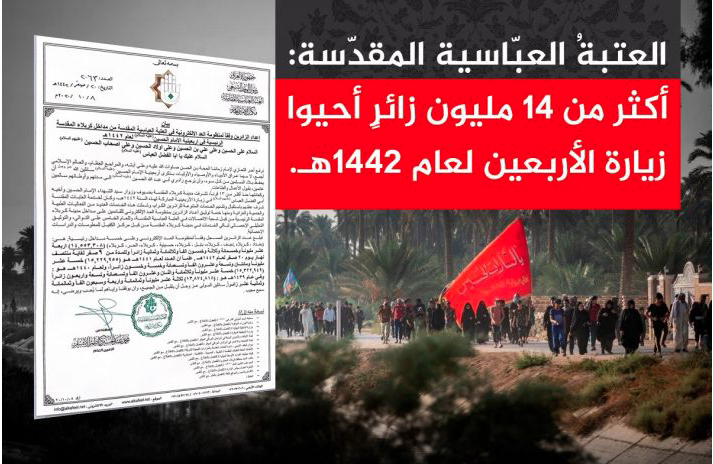 The al-Abbas’s (p) Holy Shrine announced this afternoon of the 20th Safar 1442 AH, corresponding to October 8, 2010, in an official statement received by the al-Kafeel Global Network, that the number of the visitors during the Arba’een of Imam al-Hussayn (peace be upon him) of this year 1442 AH, since the 9th Safar to mid-noon of the 20th Safar, has reached 14.553.308 visitors, according to the statistics given by the electronic counting system for the arrivals from the main entrances of Karbala. The following is the text of the statement:

As usual for more than 13 centuries, the holy city of Karbala was honored by the guests and visitors of Aba Abdillah al-Hussayn (peace be upon him) in the blessed Ziyarat of Arba’een this year 1442 AH. The servants of the holy shrines had the great honor to receive them and provide their services to the visitors. These services included many activities including the service of documenting the numbers of visitors by the electronic counting system for arrival at the main entrances of Karbala. This system was installed and managed by the Communications’ division of the al-Abbas’s (p) Holy Shrine for the fourth year in a row, and the statistical analysis documentation of the rest of the services in the holy city of Karbala by the al-Kafeel Center for Information and Statistical Studies.

The number of visitors registered according to the electronic counting system in five axes (Baghdad – Karbala, Najaf – Karbala, Babylon – Karbala, Hussaynia – Karbala, and al-Hurr-Karbala.) is 14.553.308; fourteen million, five hundred and fifty three thousand three hundred and eight visitors, For the period from 9th Safar until the noon of the 20th Safar in 1442 AH.

We ask the Almighty God to accept from everyone and to help us to what pleases Him. He is the Hearer of the Supplication.