At the shrines of Imam al-Hussayn and his brother Aba al-Fadl (peace be upon them both), poets and Radoods of Karbala bid farewell to the season of sorrows. 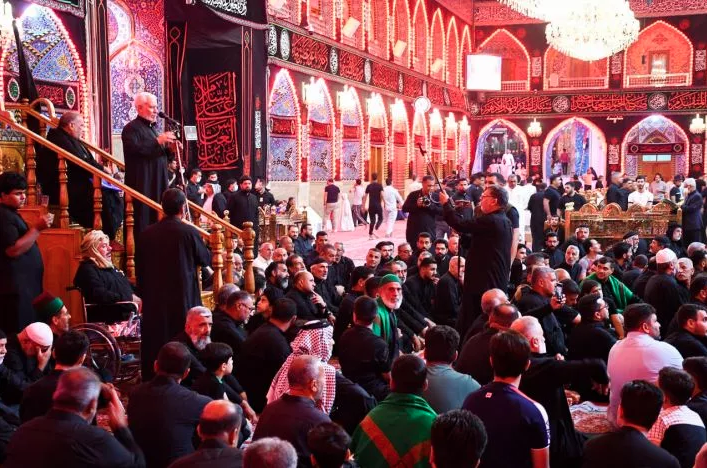 As is the custom every year in an annual tradition held at the end of the month of Safar, the servants of the Hussayni minbar from the poets and Radoods of Karbala province bade farewell to the season of grief in the months of Muharram and Safar, by marching in a mourning procession that started after the evening prayers last night from Imam al-Hussayn (peace be upon him) Qibla Street, entering his holy shrine, and then heading to the shrine of Aba al-Fadl al-Abbas (peace be upon him) to conclude in his holy sanctuary with a condolences council (latm), where the respected Haj Abd al-Amir al-Amawi al-Karbalai, the poet Abu Fatima al-Aboudi in addition to the Radood Hamed Al-Twayrjawi have participated.

The head of the department of rituals, processions, and Hussayni bodies in the two holy shrines, Haji Riad Nehme al-Salman, explained to the Kafeel network, saying: “The Karbala Poets and Radoods Organization used to revive the last night of the month of Safar, through a condolence procession that starts from the shrine of Imam al-Hussayn and ends at the shrine of his brother Aba Al-Fadl Al-Abbas (peace be upon them both), because most of the poets and radoods are committed to serving in different places, whether in the province of Karbala or outside it, and this condolence procession is the fruit of what they offered during the months of Muharram and Safar, and by which the condolence program prepared to commemorate these sad occasions, is concluded.

Stressing: “This mourning event does not mean the end of holding the condolence councils and waiting for the coming year. Rather, the Karbala Poets and Radoods Commission has continuous meetings and councils throughout the year, and it includes many young radoods, in addition to prominent figures and elders of the Husseini minbar in the holy city of Karbala, with the aim of preserving Legacy and commitment to the principles of consolation and the majlis in terms of poems, phases and so on.”

It is noteworthy that this body was founded by the late servants of Al-Hussein (peace be upon him) the great Husseini poet Sheikh Kazem Al-Mandoor and the great Al-Husseini poet Hamza Al-Zughayer in the seventies of the last century, and after all the activities of the Hussayni service were subjected to a brutal war by the previous regime, many of the Hussayni activities stagnated and stopped, and after the fall of the dictatorial regime and thanks to the efforts of the late Husseini Radood and poet Muhammad Hamza al-Radood, the Commission resumed its Husseini activity, including this mourning procession.