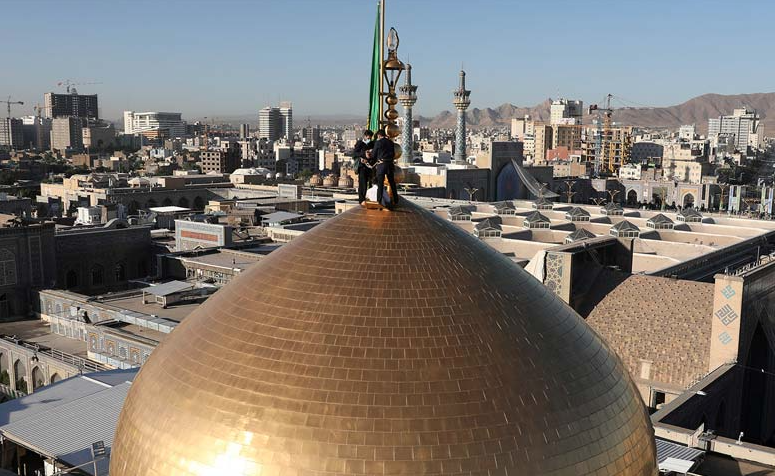 The traditional ceremony of changing the golden dome flag and covering of Imam Reza (AS) holy shrine was held in the presence of Hoj. Ahmad Marvi, the chief custodian of Astan Quds Razavi, and a group of officials, servants and pilgrims, with eulogy performance by Maysam Motiee and Javad Qaffarian.

Addressing the people and officials, Hoj. Nasser Rafiei, a professor of the seminary and university, referred to the conduct of Imam Reza (AS), stating that the first principle governing his life was rationality so that the Imam considered ignorance as the enemy and reason as the friend of every human being.
He pointed to the second principle of Imam Reza’s conduct as pragmatism and added that some say the heart should be pure and action is not important, while Imam Reza (AS) believed that words and deeds should be one. He left everything aside at prayer times and was very committed to his actions.
“The third principle was moderation which was one of the important principles in his life. He disliked exaggeration and overstatement, as well as slacking and underestimating valuable works. The other two important principles of his life were honesty and trustworthiness, principles that have been mentioned as a condition for the mission of the prophets and the recommendation of all Imams,” he noted.
Elsewhere, in line with the programs on this auspicious occasion, Mohammad Tavakkoli, Imam Reza (AS) Holy Shrine’s Deputy Office for Holy Sites, announced the release of 88 involuntary offenders in the framework of the “Zamen Ahu” program.
“Every year, in this program, the staff and servants, in coordination with the provincial loss liability office, review the cases of prisoners who are in prison for unintentional crimes and are unable to pay their liability. The release condition is provided by fully preserving the rights of the plaintiffs,” he said.
Astan Quds Razavi is the body managing Imam Reza (AS) holy shrine.