Condolences processions recall the martyrdom of the Commander of the Faithful,Imam Ali (AS). 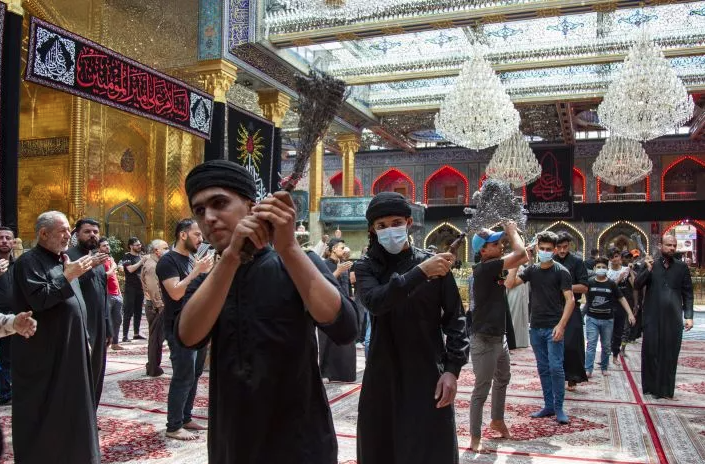 The mourning processions of Karbala revived the sad memory and calamity that befell the House of Prophecy and revelation on such days, namely the martyrdom anniversary of the Commander of the Faithful and the Master of the Pious; Imam Ali (peace be upon him) at the shrines of his sons Imam al-Hussayn and Aba al-Fadl al-Abbas (peace be upon them both).
According to what the head of the Department of Hussayni Ritual and Processions at the two Holy Shrines; Haj Riyadh Ni’mah al-Salman told the Kafeel network: “Recalling this calamity, which is considered the most sad memory after the martyrdom of the noble Prophet Mohammad (may God’s prayers be upon him and his family), is a mourning custom that the people of Karbala used to hold, Whether on this sad memory or other occasions of the martyrdom anniversaries of the infallible imams (peace be upon them). A rite that was inherited generation after generation.”
He added: “The department and its staff have prepared an organizational plan to receive these processions that were arriving immediately after Iftar. Their paths, starting and closing points were determined taking into consideration adherence to all health and medical conditions and work to implement them, in a way that ensures avoiding severe crowding or intersection between the processions, as well as the ease and smoothness of their movement, through the deployment of a number of the department’s employees at the passage points of these processions.”
At the end of his speech, Al-Salman pointed out that: “These processions will meet on the night of martyrdom with a unified procession under the name (The Unified Procession of the People of Karbala) to perform the duty of condolence collectively at the holy shrines. And then the procession will start on the next day (martyrdom day) from Karbala to Najaf Governorate, to offer the condolences at the holy shrine of the Commander of the Faithful (peace be upon him). The two holy shrines will be responsible for transporting the mourners and providing them with all necessary supplies.”
It is noteworthy that these processions, as usual, start from the paths leading to the holy shrine of Aba al-Fadl al-Abbas (peace be upon him) where they line up in groups, chanting the most painful and sad words about this tragedy, and then they walk towards the shrine of the Master of the Martyrs (may God’s prayers be upon him) passing by the square between the Two Holy Shrines.