Despite the outbreak of Corona, the Arbaeen visit in Karbala witnessed the participation of (20) parades from (8) Arab and foreign countries, personalities and religious scholars from various sects. 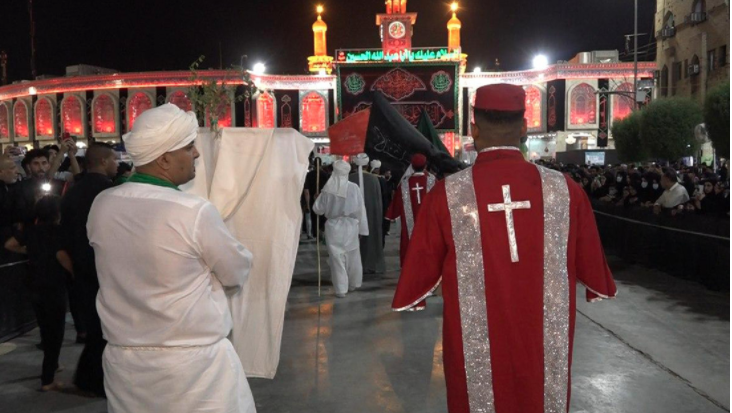 The Department of Husseini Rituals, Processions and Institutions in Iraq and the Islamic World of the Holy Shrines, the Hussaini and Abbasid, announced the participation of a number of Arab and foreign countries in the mourning and ceremonies of the revival of the Arbaeenin visit of Imam Hussein, peace be upon him, in the holy city of Karbala, as well as the participation of scholars and religious figures from multiple sects.

Condolences from Arab and foreign countries arrived in Karbala Governorate after the Iraqi government announced that it would allow (1500) visitors from every country to enter to commemorate Imam Hussein’s forty-day anniversary, about (6) months after the borders and airports were closed as a result of the outbreak of the Coronavirus.

Mr Hashem Al-Mousawi, Assistant Head of the Department, said in his speech on the official website of the Holy Hussaini Shrine, that “the number of processions that arrived in the holy city of Karbala to participate in the revival of the mourning and visit the forty for this year 1442 AH amounted to (20) processions from (8) Arab and foreign.

He added that the participating countries are Britain, Sweden, India, Pakistan, Nigeria, Saudi Arabia, Lebanon and Kuwait, pointing out that all the processions, when holding the condolences ceremonies, abided by the precautionary measures such as spacing and wearing masks and paws.

He explained that the holy Karbala governorate received (10,000) a local procession from inside Iraq according to the legal controls by the Hussaini Processions Department, and in coordination with the Operations Command and the Police Command, to revive the forty visit ceremonies for this year 1442 AH.

He added that (8800) service processions were distributed at the borders and entrances of the governorate to the old city near the shrine of Imam Hussein and his brother Abbas (peace be upon them both). In comparison (1,200) processions were assigned to the funeral according to a schedule prepared by the department.

On a related level, mourning processions in the city of Karbala witnessed the participation of scholars and religious figures from various sects and religions, such as Christianity, Yazidism, and Sabian Mandaeans.

The cleric, Riah Al-Tali, said, “Imam Hussein, peace be upon him, is for all mankind, and we unite in his holy shrine to love the homeland.”

He added, “We must create the characteristics of Imam Hussein, peace be upon him, as a symbol of humanity and a symbol of all sects, and that the procession is nothing but a message that must be conveyed to the whole world that Iraq is united and rejects sectarianism.”

For his part, a Christian cleric said, “All the participants in the march attended and united with the love of Imam Hussein, peace be upon him,” noting that “the aim of the visit is to emphasize the unity of the Iraqi people.”