Explanatory statement from the Department of Rituals, Processions, and Hussayni Bodies in Iraq and the Islamic World 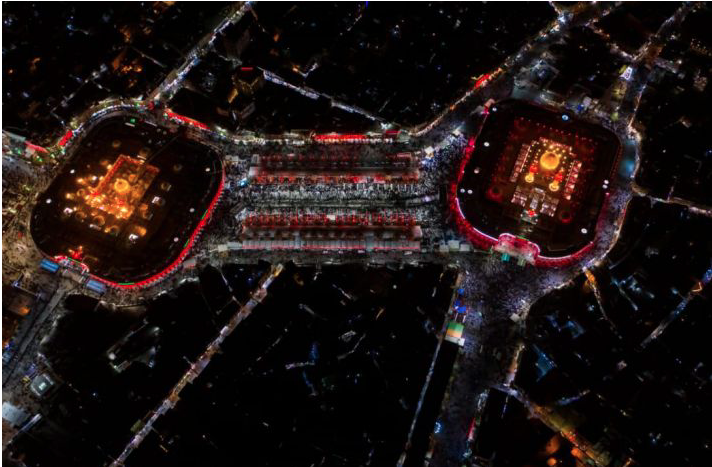 The Department of Rituals, Processions, and Hussayni Bodies in Iraq and the Islamic World, affiliated to the Holy Shrines of Imam al-Hussayn and of al-Abbas (peace be upon both of them), issued an explanatory statement this evening Tuesday (18 Safar 1442 AH) corresponding to (October 6, 2020), about the events that took place this day in the holy city of Karbala, and in The following is the text of the statement:

It is no secret for the believers the size of the tremendous organizational and security efforts exerted annually by all relevant authorities in Karbala and the central government, so that the blessed Arbaeen season comes out in its most beautiful form in the extending the condolences to the Prophet and the Ahl al-Bayt, may God’s prayers be upon them all, which reflects the morals of this honorable people who sacrificed a lot following the path of their leader, Imam Al-Hussayn, peace be upon him, in reforming all falsehood and delusion in the religion of his grandfather, Allah’s prayers be upon him and upon his family.

The custom of al-Hussayni mourning in Iraq is that the first ten days of the month of Muharram of each year are specific to each city that offers condolences to the master of the martyrs, peace be upon him, throughout the country. And the Arba’een season is devoted to the holy city of Karbala, in which the funeral processions of each governorate participate separately, with the exception of the Karbala processions, which hold condolences in the first ten days of Muharram, and devote themselves to serving the processions of the provinces as guests during the Arba’een season.

Everyone knows that the Department of Hussayni rituals, processions, and Bodies in Iraq and the Islamic world has contributed, since its establishment in the Imam al-Hussayn and al-Abbas holy shrines, after the fall of the previous regime, to highlighting the Hussayni rituals in the most beautiful way, and facilitating the matter of everyone who wants to perform them from all sides, and in two ways:

And among its organizational work is to determine the schedule for each governorate during the Arbaeen season.

And through the undertakings that the department takes from the sponsor of the procession to ensure that everyone who participates in the mourning or service is identified, in order to prevent any security breach, and to preserve the souls of the mourners and visitors, given that the registered procession wanders in the city of Karbala and enters the two holy shrines, and what is in between.

In view of this, any procession that is not registered with us, cannot go down in the daily schedule of condolences, because it has not obtained the legal procedures that guarantee the safety of the mourners and visitors, and thus will be prevented from entering in order to preserve the safety of everyone, given that the processions that meet the conditions are entered without inspection. And the failure to register any procession and his insistence on entering the condolence procession without scheduling for his condolences means transgressing the rights of the registered processions and the timetable of their descent, and thus the prestige and organization of the Hussayni condolences, and the Arba’een season that we boast about in terms of service and organization.

What happened to the procession of some brothers from Dhi Qar province who wanted to enter on the 18th of Safar 1442 AH and their insistence on entering the mourning area without obtaining any fundamental approvals from what we mentioned. Neither their procession is registered nor they entered within the timetable dedicated for their governorate.

And when they were informed that these instructions and laws were to protect them and the visitors, and in order to organize the Hussayni mourning ritual, and therefore they had to withdraw for not abiding by them, they refused, and wanted to enter by force.

And because this means endangering the security of visitors and mourners, sabotaging the mourning of the master of martyrs, and tampering with the Hussayni custom that everyone respects, for all that, the security forces confronted them to prevent them, for violating the applicable controls.

Note that this procedure is followed with everyone, and the dear brothers who have condolence and service processions alike know about it.

As for the slogans raised in each procession, the department has nothing to do with it, as long as the procession maintains the controls that it has adhered to through the undertakings it made with the department.

Every word that comes from here or there is contrary to reality and needs to be confirmed.

May God grant all success to reviving the rituals of God, preserving the dignity of the Hussayni condolences, and preserving the security of visitors and mourners … and God is the Grantor of success …

Department of rituals, processions, and Hussayni Bodies in Iraq and the Islamic world

Affiliated to the holy shrines of Imam al-Hussayn and al-Abbas (peace be upon both of them).