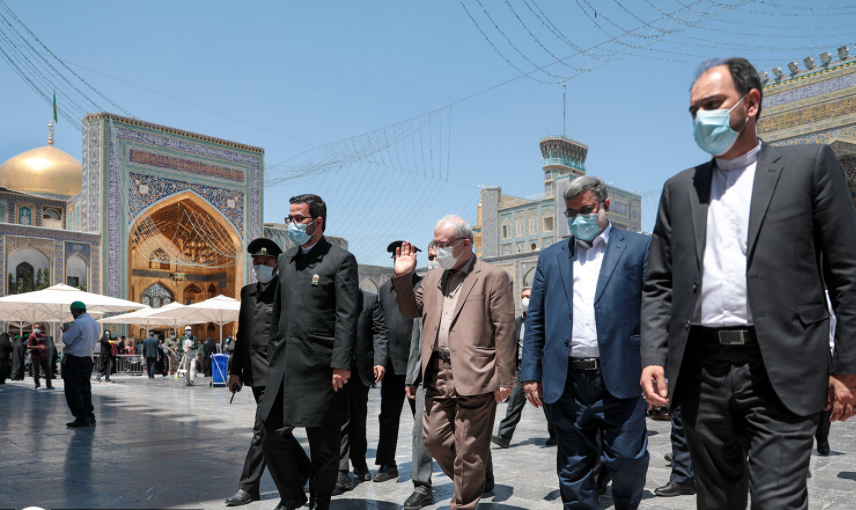 In a visit of the minister of health to Mashhad and the holy shrine of Imam Reza (AS), the performance of Astan Quds Razavi during the coronavirus pandemic was discussed with the AQR chief custodian.

Hoj. Ahmad Marvi, the AQR chief custodian, first commemorated the health martyrs in his talks, stating, “The memory of the physicians and nurses who sacrificed their lives in protecting the health of people will remain in the history of this country and the sacrifices of the medical and nursing community will never be erased from the minds and memories of the people.”
“Health Minister Dr. Saeed Namaki, officials and staff of the ministry and all medical staff of the country, managed the critical and complex situation under cruel and inhumane sanctions of the enemies. The control of the pandemic in such a severe situation is more like a miracle,” he noted.
Dr. Saeed Namaki also said during the meeting that from the day the coronavirus was observed in Wuhan, China, until today, they have been aware of the process of the virus in the world and how different countries dealt with it. When the virus mutated in the UK, it crippled Europe as a whole in terms of infrastructure and reputation, killing more than 2,000 people a day in Europe and 5,000 in the US.
“In any case, the British variant reached our country, and since its arrival in Iran, one of the concerns was that with its spread, like European countries we will face a shortage of beds and facilities but thank God, we came out triumphant in the face of this wave, and we are proud to say that in the heaviest wave of the disease, not only no patient wandered in the hospitals, but we also did not face a shortage of medicine and hospital beds,” he noted.
Namaki further stated that from his expert point of view, the fourth peak of coronavirus has gone.
The minister of health also pointed to the biased approach of many foreign media about Iran saying that the European and American media held detailed talks for the smallest shortcomings in Covid management in the country, but when Iran succeeded to curb the fourth wave, not even one of their media outlets covered the story.
Namaki referred to last year’s decision of the National Coronavirus Task Force to restrict the pilgrimage to the holy shrine adding that one of the most difficult decisions was to close the holy shrine.
“It is very gratifying that with the measures taken by AQR, on the one hand, the joy of pilgrimage was provided for the pilgrims, and on the other hand, this concern was not imposed on the country’s medical system that the pilgrimage causes further infection,” he commented.
According to Namaki, the rate of infection in the shrine city of Mashhad was much lower than expected. “This shows a great deal of tact, management and supervision of different officials in the city.”

by atiya2 years ago2 years ago
Imam Ridha Holy Shrine