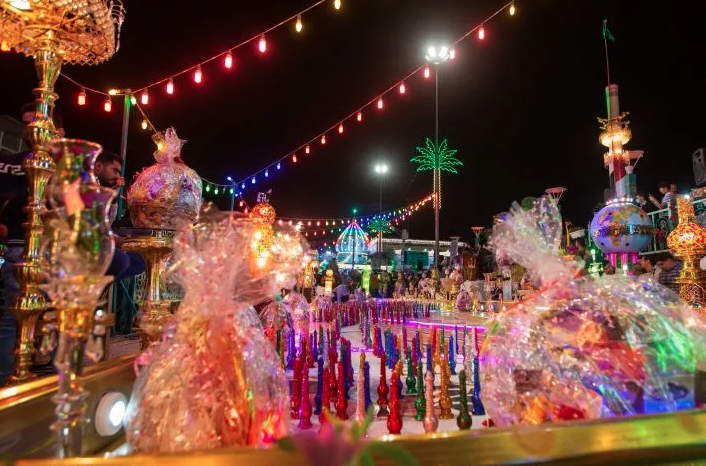 The two general secretariats of the holy shrines of Imam al-Hussayn and al-Abbas (peace be upon both of them), organized this evening (13th Sha’ban 1442 AH) corresponding to (March 27, 2021), the annual Candles Festival near the shrine of Imam al-Mahdi (may Allah hasten his holy reappearance) celebrating his blessed birth, under the slogan: (Imam al-Mahdi; The relief and broad mercy).
The festival included lighting (1187) symbolic candles indicating the age of the Imam’s life (may Allah hasten his holy reappearance), and these candles were used to write the phrase: (The Mahdi is the heir of the prophets).

According to the deputy head of the intellectual and cultural affairs department at the al-Abbas’s (p) holy shrine; Sayed. Aqeel Abd al-Hussein al-Yasiri: “The festival is an annual tradition that has been sponsored and held annually by the two holy shrines in Karbala. And this year, it was held amid preventive and medical measures as a result of the repercussions of the Corona pandemic. The organizing committee decided to choose this slogan as Imam al-Mahdi (God’s peace be upon him) is the broad relief and mercy for the believers. Praying the Almighty by the blessings of this anniversary to bestow health and wellness upon them. ”
He added: “The festival began – before the candles were lit – with a beautiful recitation of the verses of the Holy Quran by the reciter Muslim Al-Shabaki, followed by the reading of Surat Al-Fatihah as a tribute to the souls of the martyrs of Iraq, followed by the speech of the Imam al-Hussayn and al-Abbas holy shrines delivered by Sayed. Adnan Jalukhan Al-Musawi from the religious affairs department of The al-Abbas’s (p) holy shrine, and through it he offered his congratulations to the believers all over the world for the anniversary of the birth of the Savior of humanity (may the Almighty hasten his holy reappearance), asking the Lord to bless everyone to be among his supporters and those guided by his approach and the approach of his holy fathers, and to to reveal the burden of calamity on all the believers. He also highlighted topics related to the Mahdi cause, the era of reappearance, the characteristics of the waiting believer, our duty in the time of occultation [ghaybah], and how to bring happiness to the heart of our Imam.”

Al-Yasiri added: “The festival also included the recitation of a number of poems by a number of poets, as well as the religious muwashahat chanting the promised Imam and this blessed memory.”
It is worth mentioning that this festival is an annual tradition that the Iraqis held since 21 years, before the fading of the dictatorship in the 9th of April, 2003, which was one of the darkest circumstances that prevailed in Iraq since it exists. And despite the harshness of those days, an Iraqi citizen fulfilled his dream in order to commemorate the eve of the fifteenth of Sha’baan, and since the small ceremony of lighting the candles for the birth anniversary of the saviour of mankind, Imam Al-Mahdi (may Allah hasten his holy reappearance) was developed to be a festival under the supervision of the holy shrines of Imam Al-Hussayn and Al-Abbas (peace be upon both of them).

Haj. Miqdad Karim Hadi is a citizen from the City of Essawirah in Wasit Province, he was the founder of the tradition of lighting the candles by the number of the age of Imam Al-Hujjah son of Al-Hassan (peace be upon both of them), he adds a candle each year, as an indication of the age of the Awaited Imam (may Allah hasten his holy reappearance). And this year 1442AH, thanks to the Almighty and the care of the Imam of the Time (peace be upon him), during the festival, 1187 candles were lighted.