Many media benefited from the direct satellite transmission services of the Media Department of the al-Abbas’s (p) Holy Shrine during the Ziyarat Arba’een. 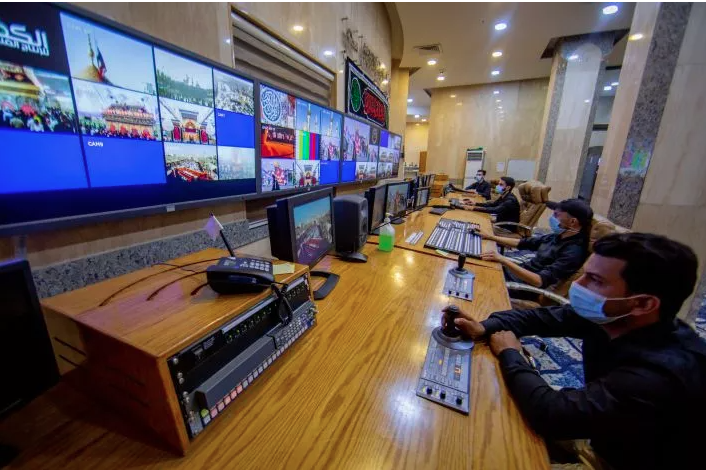 The Media Department of the al-Abbas’s (p) Holy Shrine announced that dozens of satellite channels from inside and outside Iraq have benefited from the satellite broadcasting frequency that the department provided for free and without Logo.

Assistant Head of the Department Mr. Ahmed Sadiq said: “The Al-Kafeel Center for Artistic Production and Live Broadcasting had an active and direct role in the media plan prepared by the department to cover this Ziyarat rituals, by providing free live broadcasts on many axes, the most important of which are:

– Providing a free live broadcast to cover the Ziyarat Arba’een rituals, according to a program that included the transmission of the Arba’een March from the farthest point to Karbala.

– Broadcasting small reports that were prepared in advance or during the Ziyarat.

– Preparing and implementing a package of programs that centered around the services provided by the al-Abbas’s (p) Holy Shrine, or the dimensions and objectives of this blessed Ziyarat.

– Producing short documentary films in addition to a biographical decodrama, all of which focused on the objectives and dimensions of this Ziyarat.

Sadiq asserted: “Dozens of satellite channels benefited from this service from inside and outside Iraq, which exceeded the number of beneficiary channels in the past year, as a result of the experiences gained by workers in the broadcasting field from photographers or directors and the parties that support them, in addition to the devices and equipment owned by the center. And all these things combined have led to the production of an artistic image with standards that are compatible with what the satellite channels need and meet the desires of their recipients, and thus this free (Clean) broadcast, has become a requirement for many satellite channels that wish to broadcast ceremonies and rituals of such Ziyarat in which millions of visitors participate.”

And he indicated: “The satellite frequency of the al-Abbas’s Holy Shrine has spared effort to satellite channels in terms of the mobile vehicles of their direct broadcasts and their cadres, and the image becomes accessible to them without any fatigue or hardship, in addition to providing these services on the YouTube and social media platform with high accuracy. all of which enabled the satellite channels to benefit from the programs that were prepared for this purpose without (Logo). ”

He concluded, “The Media Coordination Center of our department played an important role, in receiving media professionals, satellite channels correspondents, and various local and international agencies and facilitating their work.”

It is noteworthy that the Al-Kafeel Center for Artistic Production and Live Broadcasting has its own frequency and broadcasts its programs through it for free during the season of each Ziyarat.