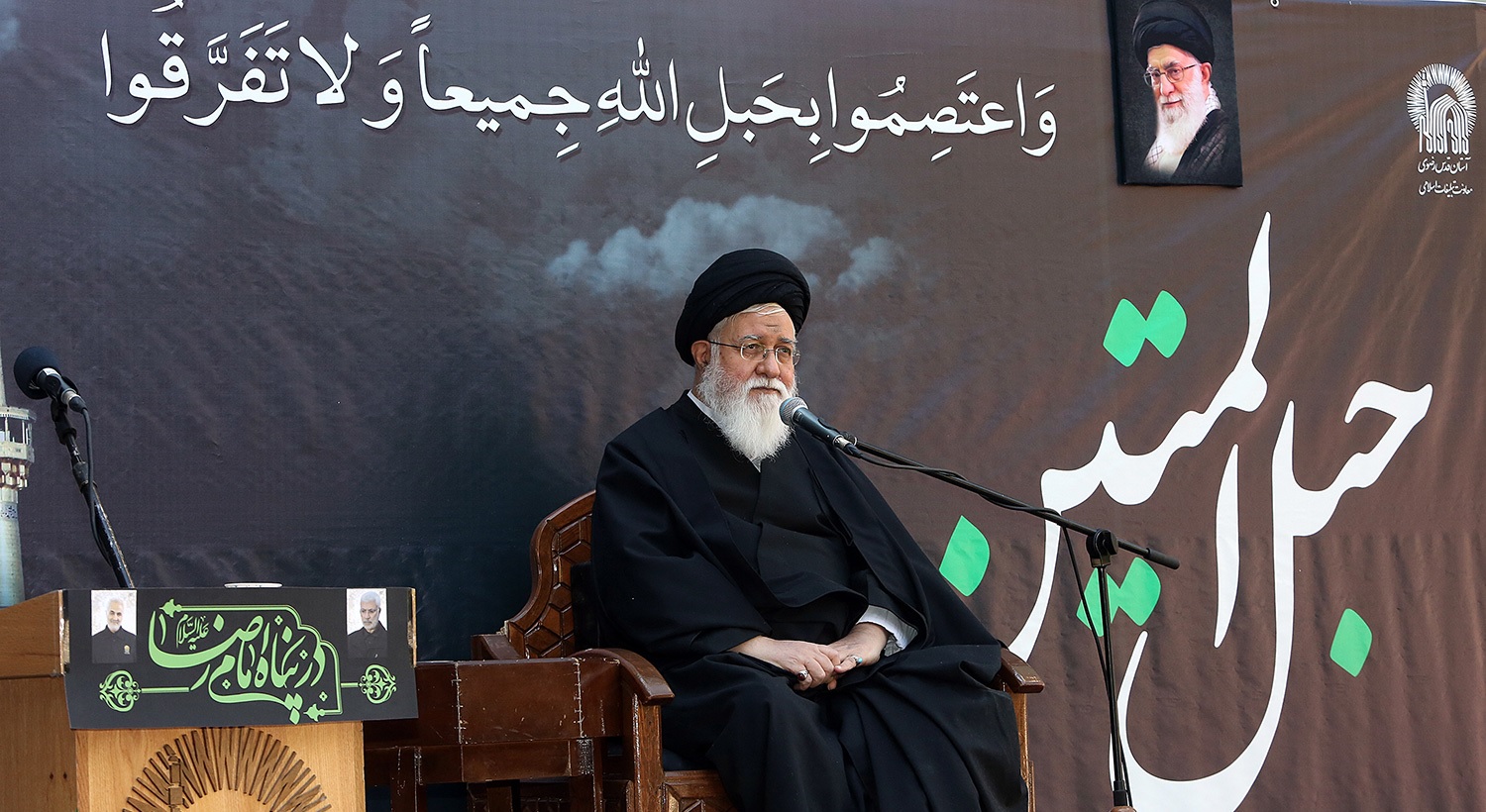 Muslims have to model Prophet (pbuh) of Islam in their fight against the global arrogance, said Seyyed Ahmad Alamolhoda, Leader’s representative in Khorasan Razavi Province in a meeting with Sunni Friday prayer leaders in Imam Reza (AS) holy shrine.

Ayatollah Alamolhoda raised the issue in a special ceremony held on the eve of the demise anniversary of Prophet Muhammad (pbuh) and martyrdom anniversaries of Imam Hassan (AS) and Imam Reza (AS) in the holy shrine’s Mirza Jafar seminary school.
Elaborating a tradition about hardships and difficulties of the Prophet’s mission, Ayatollah Alamolhoda said: “The Prophet (pbuh) experienced many different oppressions and wars since the start of his mission as a prophet up to the day of his migration to Medina. The huge amount of oppressions and killings was really intolerable for the Prophet (pbuh) during those 13 years”.
Ayatollah Alamolhoda added: “The difficulties and afflictions Prophet Muhammad challenged with during his mission can be compared to hardships of no other prophets including those of Prophet Noah and Prophet Ibrahim”.
Elsewhere Leader’s representative in Khorasan Razavi Province said: “Following social growth among Muslims as his main goal, the Prophet (pbuh) formed his intellectual and cultural sovereignty against the then arrogance front which were Persian and Roman empires. The Prophet (pbuh) had received this power from the Holy Quran and following 23 years of torture and affliction”.
He stated that the last prophet consolidated sovereignty of Quran against empires of the time; therefore, he tolerated lots of afflictions as a result of vastness of Islam’s lands and plots of Jewish clans.
The Friday prayer leader of Mashhad introduced Jews as the worst group of people during mission of Prophet (pbuh) of Islam, adding: “With the aim of excessing enmity with the Prophet (pbuh), the Jews, infidels, and pagans did many crimes toward Hazrat Muhammad (pbuh) and his family”.
Ayatollah Alamolhoda reiterated that people related to Hazrat Muhammad (pbuh) left their homes for deserts to find somewhere safe at that time; some of them were killed by the Jews and some others died of thirst and hunger. “Islam has been receiving lots of attacks from oppressors, pagans, and arrogant powers since the beginning.”
He further noted that the current situation of Islam is different from its past because the arrogance front is trying to overthrow Islam by attacking the Islamic Republic of Iran.
Leader’s representative in Khorasan Razavi province introduced US government as the main country at the helm of anti-Islam front trying to overthrow the Islamic Republic of Iran. “As the great Satan, the US regime is at the first line of enmity with Islam because it has found Islam as a big obstacle to its global domination”.
“To defend Islam, we have to resist against disbelief front exactly like the way Prophet Muhammad (pbuh) did,” said Alamolhoda adding “Moreover, sacrifice is fruitful when the doer is striving in Islam’s front and endeavors out of this front will be doomed to failure”.
He reiterated: “The Islamic Republic of Iran was established to resist against world arrogance. In the shadow of unity between Shia and Sunni Muslims, this system of government will become more powerful day by day”.
The ceremony was participated by a group of Sunni Friday prayer leaders from Khorasan Razavi, North Khorasan, South Khorasan, Kordestan, Sistan and Baluchistan, Golestan, Azarbaijan, Kermanshah, and Hormozgan provinces.