On the fifth of Sha’ban the world was enlightened by the birth of the fourth Imam; Imam as-Sajjad (peace be upon him) 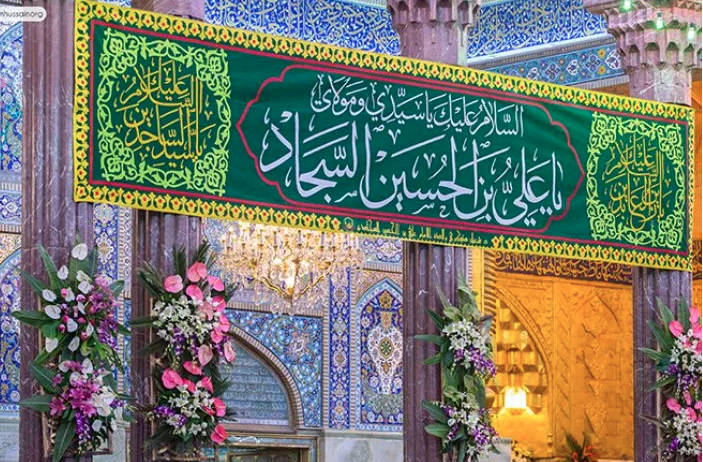 On the fifth of Sha’ban of the year 38 AH, the house of the Prophecy, all their Shiites and lovers, received with joys and delights one of the bright moons of Ahl Al-Bayt (peace be upon them). The world was enlightened with the birth of Imam As-Sajjad Zayn Al-Abideen (peace be upon him) who blew the springs of science and wisdom on earth, and gave to the people the finest examples and lessons in selfless, asceticism and devotion to God.

His honoured mother (Allah’s blessings be upon her) was Shahzenan “Shahrbanu” daughter of Yazdegerd the last king of the Sasanian. She was one of the wisest women of her time, she was at the forefront of Muslim women. It is said that when she first came to Ali Ibn Abi Taleb (peace be upon both of them) she was accompanied by hundred maids, So Imam Ali (peace be upon him) ordered: “Be generous with her as she grew up in grace.”

On the day of his birth (peace be upon him), the Sunnah of the newly born was performed, the Adhan was recited at his right ear and the Iqamah at his left ear. And on the seventh day of his birth, his father did his Aqiqah with a ram and shaved his hair, and gave its weight silver of gold for charity in accordance with the holy Islamic Sunnah.

He (peace be upon him) had many nicknames: Abu Al-Hassan, Abu Al-Husayn, Abu Mohammad, Abu Abdillah, Abu Al-Qassem and Ibn Al-Khiratayn. His titles were: As-Sajjad, Zayn Al-Abideen, Dhu Thafanat, Al-Zaki, Al-Ameen…The most famous title of the fourth Imam Ali Son of al-Husayn (peace be upon both of them) are Zayn Al-Abideen and Sayed Al-Abideen [master of worshippers] like he was called by the Messenger of Allah (prayers and Allah’s peace be upon him and his holy Household).

Imam Zayn Al-Abideen (peace be upon him) used to go out in the dark nights, carrying on his back bursa of hubs full of Dinars and Dirhams, and sometimes also bursa of food and knocked the doors of the poor and handed it to them while covering his face. It was only after his death while performing Ghusl, they discovered on his back the traces of carrying heavy bursa like camels’ back.

Abu Hamzah Thumali says, “I saw Ali Son of al-Husayn (peace be upon him) whose cloak fell off his shoulder in prayer, but he did not move to put it in place until his prayer completed. I asked him the reason. Imam (peace be upon him) said, ‘Do you know who I was standing before? Surely one’s prayer is accepted as much as his heart attends to Allah.’”

When Imam As-Sajjad (peace be upon him) rose for performing prayer his face paled, his body trembled, and his state changed. When he was asked for the reason, he said, “I am going to rise before a Great King.” When he began praying, he ignored everything and it was as if he heard no voice. Abdullah, the son of Imam As-Sajjad (peace be upon him) says, “My father prayed at nights until he got tired and crawled to his bed like children.”

One of the night Sayf the servant of Imam As-Sajjad (peace be upon him) saw him crying, so he asked him: “What makes you cry of son of the Messenger of Allah, and you are who you are and your grandfather is the Messenger of Allah (prayers and Allah’s peace be upon him and his holy Household)?”
The Imam replied: “Oh Sayf! know that all the eyes will weep on the resurrection day except five eyes: an eye which shed tear from the fear of Allah, an eye that was gouged in the way of Allah, an eye which refrained from seeing the things prohibited by Allah, and eye which shed tears for the tragedy of my father Al-Husayn and an eye which remained waking in the night till morning in the worship of Allah. The almighty God looks at the worshippers during the nights and tell to the angles, look at my servant, his body is prostrating to me and his soul is by me, he is invoking me by fear of my torment and by desire of my heaven. Be witness oh my angles that I have forgiven him.” Sayf then said: O my master, pray so Allah make me have one of those eyes.

Sheikh Tabarsi in Ehtejaj and in others has narrated from Thabet Banani that one year we decided to perform the Hajj pilgrimage with a group of Basrah’s hermits like Ayoub Sajestani, Saleh Morry, Otbat al-Qolam, Habib Farsi and Malek ibn Dinar. When we reached Mecca, water was scarce due to low rainfall. Everybody was thirsty and heated and so they complained and asked us to pray and request rainfall. So we went to Ka’ba and circulated and begged God Almighty with much humility and courtesy to send rain but nothing happened. In this state suddenly a young man headed towards us and said: “Wasn’t there one person among you loved by God?”

We said: “O, young man! We pray and God grants.”
He replied: “get away from Ka’ba, if there was one person among you whom God loved he would have granted your wish.” Then he approached Ka’ba and kneeled on the floor and supinated saying: “My lord! I beg of you on your love for me to quench these people’s thirst with rain.”

He had not yet finished when clouds moved and it started raining.
I said: “O, young man! How did you know that God loves you?”
He answered: “If he did not he would not have made me a successor, so I begged him on his love and he granted me my wish.”