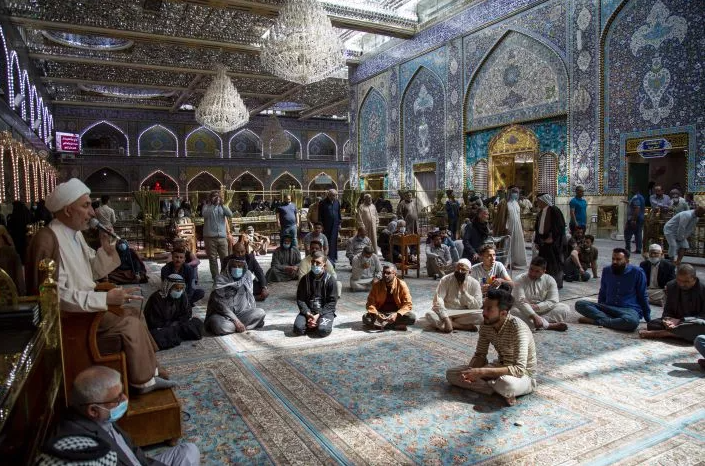 The al-Abbas’s (p) holy shrine, represented by the Department of Religious Affairs, recalled the auspicious birth anniversary of Ali al-Akbar son of Imam al-Husayn (peace be upon them both), which coincides with this day (Sha’ban 11). A religious lecture was organized in the courtyard of the shrine of Aba al-Fadl al-Abbas (peace be upon him).

The lecture given by Sheikh Mohsen Al-Asadi dealt with several axes and stations from the biography of this figure, whose name was engraved and inscribed in the pages of history in letters of light. Sheikh al-Asadi showed the high position of Ali al-Akbar son of Imam al-Husayn (peace be upon him) who was born in the house of the perfect faith and piety, and his status is great as stated by Ahl Al-Bayt (peace be upon them). In Karbala the day of Ashura, while sending Ali Al-Akbar to the battlefield, Imam Al-Hussayn (peace be upon him) raised his hands and said: “O Lord! Bear witness on those people for he who emerged to them is bearing a strong likeness to Your Prophet in all departments – resemblance of disposition, complexion, and logic. Hence we look at him when we crave to see Your Apostle. O, Lord! Deprive them of the riches of the land, divide them, rend them asunder and turn them into smithereens. Never make the rulers be happy with them, for they sent for us so that they may support us but transgressed against us and killed us.” He then recited Allah’s words, “Surely, Allah chose Adam and Nuh and the descendants of Ibrahim and the descendants of Imran above the nations, offspring, one of the other, and Allah is Hearing Knowing”.

He also spoke about n the status of Ali al-Akbar (peace be upon him) in the heart of the imams of the Ahl al-Bayt (peace be upon them). As in the holy Ziyarat, Imam As-Sadeq (peace be upon him) speaking with Ali Akbar, saying: “(May I ransom you) with my father and mother, you are a slaughtered and murdered without a crime.”