Removal of the black sadness banners from the al-Abbas’s (p) Holy Shrine. 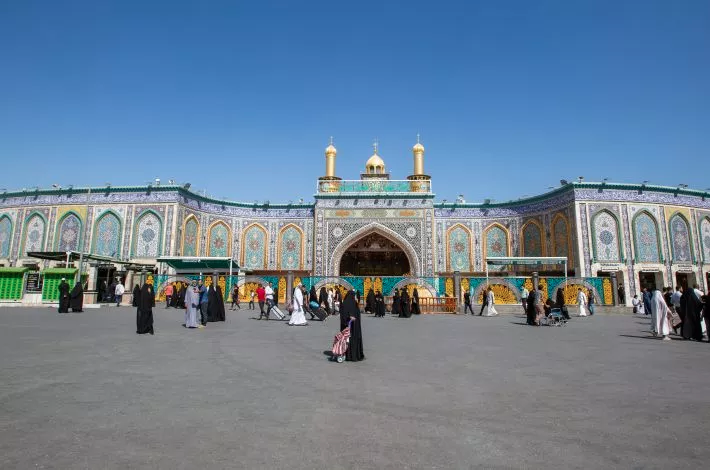 After the end of the season of the sorrows of the family of Mohammad (peace be upon them) and the announcement of the proved sighting of the crescent moon of the month of Rabi` al-Awal, and as usual, the black sorrows banners, which were spread in the holy shrine and sanctuary of Aba Al-Fadl Al-Abbas (peace be upon him) and its outer surroundings during the months of Muharram and Safar, were removed to announce the end of the season of grief of the family of Muhammad (peace be upon them) and the reception of the month of Rabi’a al-Awal.
The works were in stages, the beginning was from the outer perimeter of the al-Abbas’s holy shrine, then passing to the corridors of the holy sanctuary starting with the holy grid, where the black sadness banners and its special condolence cover were removed, in addition to the black sadness banners that covered the inner walls of the sanctuary. These works were concluded by changing the holy dome’s flag from the black one on which (Ya Saqi ‘Atasha Karbala [oh he who quench the thirsty one in Karbala]” was written, to the red flag with (Ya Qamar [O moon of] Bani Hashem) of the same size. And these works were also accompanied by lighting green lamps instead of red lamps.