Removing the barriers from some streets leading to the two holy shrines to facilitate the movement of visitors. 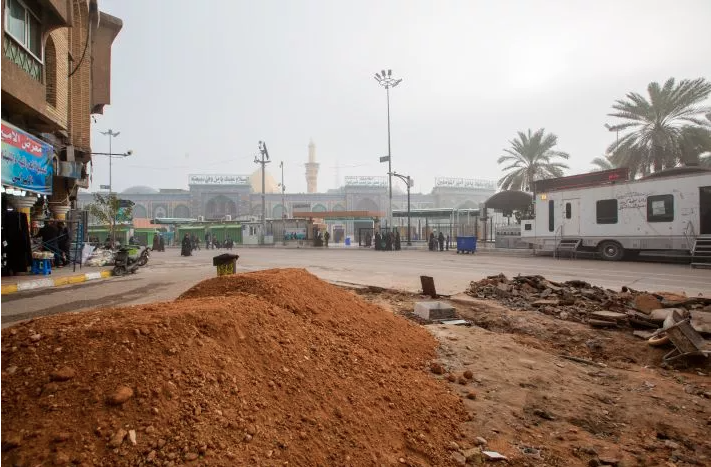 The cadres of the maintenance and engineering construction department at the al-Abbas’s (p) holy shrine began to remove security barriers in a number of streets leading to the shrines of Imam al-Hussayn and of his brother Aba al-Fadl al-Abbas (peace be upon them both), namely Sahib al-Zaman Street (may God hasten his holy reappearance) and Umm al-Baneen Street (peace be upon her), In order to contribute to facilitate the traffic and flow of visitors and residents of the region.

This work was in coordination with the Department of the area between the Two Holy Shrines, the Governorate Police Command and its operations, and the Department of Preserving Order at the al-Abbas’s (p) Holy Shrine. Instead of security barriers, there will be only mobile teams to follow up and monitor the security situation and organize the movement.

The head of the Department of the area between the Two Holy Shrines, Sayed. Nafeh Al-Mousawi, explained to the Al-Kafeel network, saying: “These actions were carried out after taking all the fundamental approvals from the security authorities (protecting the two holy shrines) and the security departments in the Imam al-Hussayn and al-Abbas holy shrines. These works contribute to the ease of visitor movement, especially on the special Ziyarat in which millions of visitors flock to Karbala in addition to the inhabitants of the area. We will work to make them ideal entrances without any barriers in these two important streets, and suffice with the foot patrols of the staffs of the Department of Preservation of Order and the security forces affiliated with the protection of the holy shrines, to follow up and monitor these places.”

The official of the Construction Works Division in the Engineering Maintenance and Construction Department of the al-Abbas’s (p) holy shrine – which is the body in charge of these works-, Engineer Mohammad Mustafa al-Taweel explained to the al-Kafeel network, saying: “The work to remove these barriers is part of an expanded campaign established in cooperation with the Karbala Municipality Directorate. After the completion of the removing of the barriers of the Qibla Street to the shrine of Aba Al-Fadl Al-Abbas (peace be upon him), Al-Alqami Street and Baghdad Gate Street, we started the work in these streets that are no less important than the previous ones, as they are among the main and secondary entrances for the visitors. The works included removing fixed and mobile barriers and caravans to making these streets open without any hindrance while arranging and rehabilitating the spaces that they used to occupy.

At the end of his speech, Al-Taweel asserted, “These actions have contributed to increasing the capacity of the streets and reducing the crowds under these circumstances, which will contribute to the flow of visitors’ movement and condolences’ processions on special occasions.”