Sha’ban decorations in the square between the two holy shrines 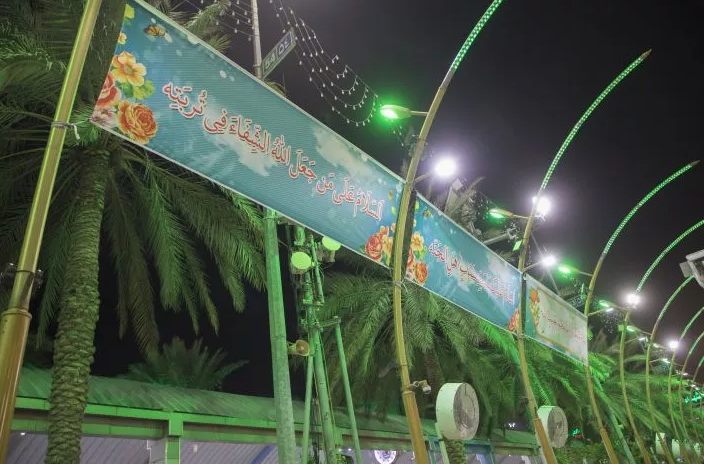 Karbala welcomes the month of Sha’ban with a lot of happiness, and joy and happiness are appearing in the decorations of the square between the Two Holy Shrines, rejoicing in the coming of this holy month and celebrating the birth anniversaries of the Mohammadian moons; Imam al-Hussayn, his brother Aba Al-Fadl Al-Abbas and his son Imam al-Sajjad (peace be upon them) and the birth of the Master of the Order and the Time; al-Hujjah son of al-Hassan (God Almighty hastened his holy reappearance).

Alaa Emad Badr Al-Yasiri, the media unit official in the Department between the two holy shrines, stated to Al-Kafeel Network: “The Department between the two holy shrines like the rest of the departments at the al-Abbas’s (p) holy shrine, harnessed its efforts to decorate all parts of the square, starting from the outer perimeter of the shrine of Aba Al-Fadl Al-Abbas (peace be upon him), to the shrine of his brother, Imam Aba Abdillah Al-Hussayn (peace be upon him), where coloured lamps were lit the square, in addition to that we hung (30) banners on which sayings of the Imams of Ahl al-Bayt (peace be upon them) were written, highlighting these occasions and the importance of their characters. The banners were hung in a beautiful artistic way that is consistent with what surrounds them, and they were distributed equally on both sides of the square”.

It is noteworthy that the department between the Two Holy Shrines has prepared a service, security and health plan that is in line with the current circumstance, and will seek through it to provide the best services to the visitors.