Starting work on rehabilitation and development of the second largest gate in the al-Abbas’s (p) Holy Shrine. 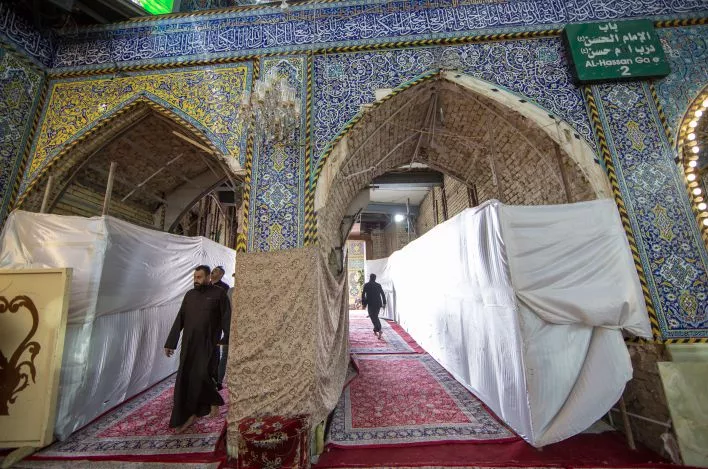 The Engineering Projects Department at the al-Abbas’s (p) holy shrine announced that it has begun rehabilitating and developing the gate of Imam al-Hassan (peace be upon him), which is located in the southwestern part of the holy sanctuary of Aba al-Fadl al-Abbas (peace be upon him), which is the second largest gate in the holy shrine after the Qibla gate. It overlooks the square between the two Holy Shrines.

These works are part of the rehabilitation and development project for the gates of the Holy Shrine, with designs of urban harmony and artistic coordination aimed at showing them in a way that is consistent with their main entrances.

The head of the aforementioned department, Eng. Dea’ Majeed Al-Sa’egh, spoke to Al-Kafeel Network about these works, saying: “The al-Abbas’s (p) holy shrine paid great attention to all gates and entrances to the holy shrine of Aba al-Fadl al-Abbas (peace be upon him) that came in line with the largest project, which is the horizontal expansion of the Holy Shrine, making these gates architectural and artistic masterpieces of great splendor and beauty.”

He added: “Then the works started to link these entrances with the old doors, according to modern designs that combined the nobility of the past with the modernity of the present. And the rehabilitation of the gate of Imam Al-Hassan (peace be upon him) is part of these works, as it is one of the most important entrances, especially for the movement of condolences processions during the special occasions.”

Al-Sa’egh explained: “The first stage of the work that was initiated included pulling out old building materials, treating the walls with special materials, and wiring some of the needed systems. Work is carried out according to a plan that ensures that the gate will not be closed because it is one of the important gates, so the work has been divided into two parts in a way that contribute to continuous visitor traffic. ”

He concluded: “The cadres of the operating company of the Ard al-Quds Construction Contracting Company have drawn up a work plan that includes all the nine gates of the Holy Shrine, in a sequential manner and with a design that is architecturally and artistically consistent with its external entrance on one side and with the Holy Sanctuary on the other side.”