The Birth of Imam Muhammad Baqir(A.S.) 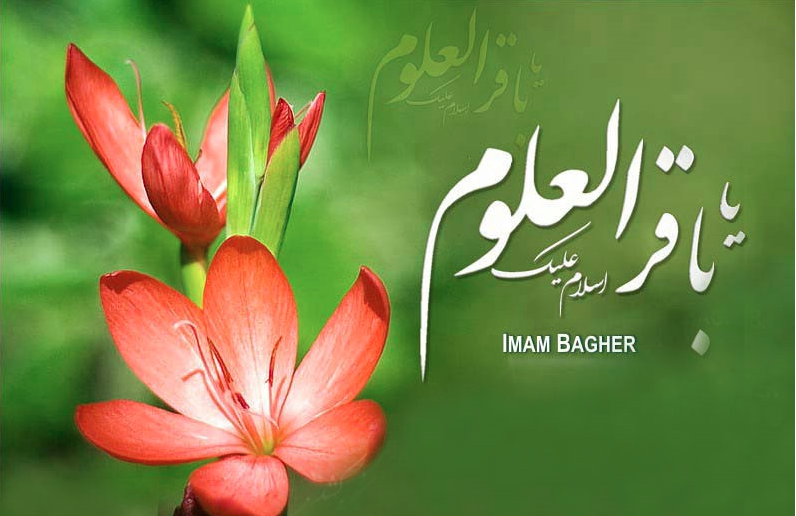 The members of the House (Ahl al-Bayt (A.S.)), received the baby with much rejoicing and pleasure. They were very happy with him, for he was in whom the elements of the two grandsons (of the Prophet), al-Hasan and al-Husayn , mixed. Those noble origins through which Allah strengthened the Arabs and the Muslems mixed in him, too. As for the noble backbones and the pure from which he branched, they are:
His Mother
As for his mother, she was a pure chaste woman. She was Fatima, the daughter of Imam al-Hasan, the Lord of the youth of Heaven. She was given the kunya of Umm ‘Abd Allah (the mother of ‘Abd Allah) (Thahdhib al-Lugha wa al-Asma’ vol. 1, p. 87. Ibn Khullakan, Wafayat al-A’yan, vol. 3, p. 384. Al-Mahbar, p. 57. Al-Ya’qubi, Tarikh, vol. 2, p. 60. A’yan al-Shi’a, 1/4/464).
She was among the Hashimite women. Ima`m Zayn al-‘Abidin, peace be on him, called her al-Siddiqa (the very truthful one).(Abu al-Hasan al-‘Amili, Diya’ al-Amilin, vol. 2. Al-Dur al-Nazim, serial 2879).
Concerning her Imam Abu ‘Abd Allah al-Sa`diq, peace be on him, said : “She was very truthful. No one in the family of al-Hasan looked like her.(Usul al-Kafi, vol. 1, p. 469).
It is enough for her highness that she was part of the plant of the sweet basil of the Apostle of Allah (i. e. Imam al-Hasan), and that she grew up “in the houses which Allah permitted to be exalted and that His name may be remembered in them.”She brought up Ima`m al-Ba`qir, peace be on him, in her pure lap. She poured upon him rays of her pure soul. She fed him with her noble ideas that became part of his qualities.

His Father
His father Imam Zayn al-Abidin(A.S.) was the Lord of the prostrators (in worship) and ornament of the worshipers. He was the best of all the Moslem figures in jurisprudence, knowledge, and religious piety. We will mention a brief study on his affairs in the following researches.

The Great Baby
The world shone on the birthday of the pure Ima`m (Mohammed al-Ba`qir). The Prophet, may Allah bless him and his family, had given good news to him before his birth. The members of the House (ahl al-Bayt), peace be on them, waited for him impatiently. That is because he was among the Ima`ms of Moslems. Namely the Prophet, may Allah bless him and his family, nominated those Imams.
He made them leaders for his community and related them to the Koran. Ima`m Mohammed al-Ba`qir was born in Medina, on the third day of the month of Safar, in the year 56 A. H.1 It was said (that he was) on Friday, during the early days of the month of Rajab.( Dala’il al-Imama, p. 94. Farid Wajjdi, Da’irat al-Ma’arif, vol. 3, p. 563).
He was born three years before his grandfather, Ima`m Husayn, peace be on him, was killed. (Ibn al-Wardi, Tarikh, vol. 1, p. 184. Akhbar al-Duwal, p. 111. Ibn Khulakan, Wafayat al-A’yan, vol. 3, p. 314).
It was said (that he was born) four years, as he, peace be on him, said, (before the martyrdom oh his grandfather). (Al-Ya’qubi, Tarikh, vol. 2, p. 60).
It was also said (that he was born) two years and some months (before the murder of his grandfather). 1The last date is unusual. No one accepts it.
The religious rituals such as adhan and iqama in his ears were performed for him when he was born. Other rites were also performed for him on the seventh day of his birth: His hair was shaved. The weight of his cut hair in sliver was given to the needy as alms. A ram was sacrificed for him and was given to the poor as alms.
He was born during the time of Mu’a`wiya. At that time the Islamic countries were full of oppression. Moreover, they were full of disasters and misfortunes. That was because of the oppression of Mu’a`wiya and the injustice of his governors who spread terrorism and oppression in the country. Ima`m al-Ba`qir talked about that dreadful injustice. We will mention his speech in this book.

His Name
His grandfather, Allah’s Apostle, may Allah bless him and his family, named him Mohammed. He also gave him the Kunya of al-Ba`qir. That was ten years before al-Ba`qir was born. That was among the Prophet’s prophecies, as some researchers said. The Prophet, may Allah bless him and his family, knew from the unseen that his grandson would do such as proclaiming knowledge among his community. Thus, he gave good news to his community about him. He also sent him his greetings through the great Companion (of the Prophet), Ja`bir b. ‘Abd Allah al-Ansa`ri. We will mention that in the following (chapters).

His Title
He had only one kunya. It was Abu` Ja’far. He was called by the name of his son, Ja’far al-Sa`diq, peace be on him, who renewed the life of this community and split open the fountains of wisdom in the earth.

His Features
Ja`bir b. ‘Abd Allah al-Ansa`ri said that his features were similar to those of Allah’s Apostle, may Allah bless him and his family.( Usul al-Kafi, vol. 1, p. 469).
His morals were also similar to the Prophet’s high ones that distinguished him from the other prophets.
Some contemporary people have described Imam al-Baqir as follows: He was a man of medium height. He was brown.( Akhbar al-Duwal, p. 111. Jawhart al-Kalam fi Madh al-Sada al-A’lam, 132).
He had soft skin with moles. He had a thin waist. His voice was good. He always bowed his head.( A’yan al-Shi’a, 1/4/471).