The birth of the best of Allah’s creation; the Holy Prophet (Allah’s prayers be upon him and upon his holy Household). 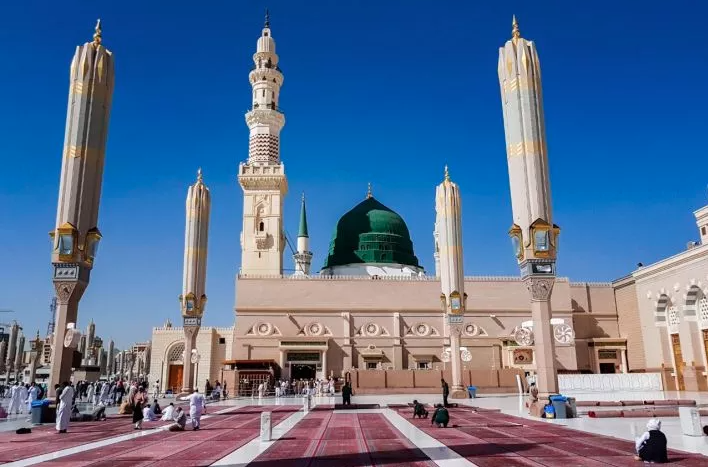 On the dawn of the seventeenth of Rabi` al-Awal, and after fifty-five days after the destruction of the owners of the elephant [the event stated in the chapter of the elephant, Quran], the Messenger of the Almighty Allah and the intercessor of the Ummah; the Most Generous Prophet Mohammad (Allah’s prayers be upon him and his family) was born.

This unparalleled day is the best of days by the blessing of his holy birth (Allah’s prayers be upon him and upon his holy Household). All the prophets, saints and angels (peace be upon them) were waiting for this great event, for which the messages that God Almighty sent to the nations throughout history have prepared. It is the greatest, the best and the most honorable day in history, as it is the day of the birth of the beloved of God and the best of His creation.

It is narrated from Imam Ja’far as-Sadeq (peace be upon him) that the cursed Iblis used to go up to the seventh sky to hear the heavenly talks. When Jesus [‘Isa] (peace be upon him) was born, he was prevented from going up to three skies. But he was going up to the fourth sky. When the last Prophet Mohammad (Allah’s prayers be upon him and upon his holy Household) was born, Satan was prevented from reaching all the skies and they (the Satans) continued to be driven away by shooting stars.

Observing this the Quraishi people said: “According to what we have heard from People of the Book, the time for the destruction of the world and of Judgment Day has approached.” Amr bin Umayyah who was the most knowledgeable of his time said: “If one of those prominent stars through which people know about the time of heat and cold falls down you should understand that the time of destruction of the world has arrived. But if those stars remain at their station and other new stars appear, it is the sign of manifestation of something very strange and wonderful.”

On the day the Holy Prophet (Allah’s prayers be upon him and upon his holy Household) was born, all the idols in every part of the world toppled, the palace of the king of Iran Kisra shook and 14 turrets came down and the river Sawah which was being worshipped by the polytheists dried up and became salty and the valley of Samawah, which did not have any water got filled up to the banks and the fire of the fire temple of Persia, which was burning continuously for the last thousand years, extinguished totally.

On that very night the arch of Kisra broke up into two and tumbled down and the water of Tigris began to flow in his palace. The same night a light rose up from all round Hijaz which lit up the entire world.

The thrones of all kings have fallen down that morning and all the kings became dumb and were unable to speak and the knowledge of all soothsayers had became dull and the magic of all magicians had failed and every soothsayer was separated from his twin and Quraish were accepted as leaders of all Arabs.

People called them the family of God as they were the neighbor of the house of Allah (in Mecca). Aaminah (peace be upon her) says: “When the Holy Prophet (Allah’s prayers be upon him and upon his holy Household) was born, he put his hands on the ground raised his head to the sky and looked all around. A kind of radiance appeared from his body which lit up everything. In that light I saw the palaces of Syria and in its midst I also heard a voice as if someone was saying:

The best of creation is born. Name him Mohammad. When the newborn was brought to Abdul Muttalib [his grandfather], he took him in his arms and said: “I praise and thank Allah who blessed me with such a handsome son who surpasses all children.” Then he put in the child’s neck an amulet containing the names of the pillars of the Kaaba and composed a poem praising the newborn’s grace.

At that moment Satan called his entire progeny. They came up to him and asked: “What has made you so restless?” Iblees [Satan] replied: “Woe unto you. Throughout this night I was observing changes in the sky and the earth. Surely some great event is to occur because, ever since Jesus [‘Isa] (peace be upon him) went up to the sky such change was never observed. So all of you spread out and find out what has happened.” They dispersed and soon they returned and reported: “We could not find anything.” The cursed one said: “Now it is only for me to find out the great happening.”

Then he left and passing through the whole world approached the Holy Kaaba. He saw that the house was surrounded by angels all around. He tried to enter Kaaba. The angels challenged him saying: “O cursed one! Go back.” He ran away from there, became small like a sparrow and entered from the direction of Mount Hira. Angel Gabriel [Jibra’il] scolded him saying: “Get out of here.” He said: “O Gabriel [Jibra’il]! Please let me know just what has happened in the world last night.”