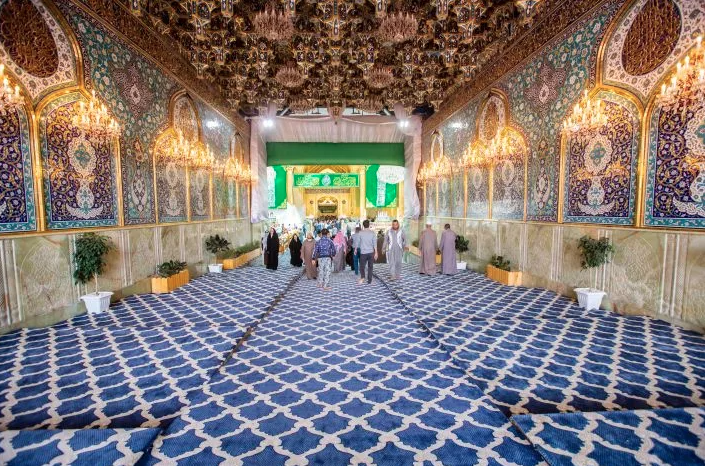 The cadres of the Department of the Care of the Holy Shrine in the al-Abbas’s (p) Holy Shrine furnished the corridors of the gates leading to the shrine of Aba al-Fadl al-Abbas (peace be upon him), with a special quality of carpet according to the measurements of each gate, coinciding with the auspicious birth anniversaries of the Alawi moons, including the birth of the Bani Hashem’s moon Aba al-Fadl al-Abbas (peace be upon him), which contributes to showing these corridors in a decent and beautiful appearance.

The assistant head of the aforementioned department, Mr. Zain al-Abidin al-Quraishi, explained to Al-Kafeel Network, saying: “The carpets’ replacement in the gates and entrances to the al-Abbas’s (p) holy shrine is done according to a schedule. Our staffs, in cooperation with the Sayed servants and the staff of the sewing division in the Engineering Maintenance and Construction Department, began to put these new carpets after measurements were completed for each gate, and in its first phase it included both the gates of al-Qibla and Imam al-Hasan (peace be upon him).”

He added: “As for the qibla gate, which is considered to be the most important of the gates of the al-Abbas’s (p) holy shrine, it was furnished from its main entrance to the Taremah of the holy sanctuary.”

It is noteworthy that the department of the Holy Sanctuary has the duty to furnishing with carpets and washing them from time to time, in order to preserve the beauty of the courtyard surrounding the holy sanctuary of Aba al-Fadl al-Abbas (peace be upon him), and to perpetuate the spiritual aura felt by the honourable visitor during his visit to the shrine of the Master Aba al-Fadl al-Abbas (peace be upon him).