The eve of the nineteenth of the holy month of Ramadhan; the night of the wound of Imam Ali (AS) 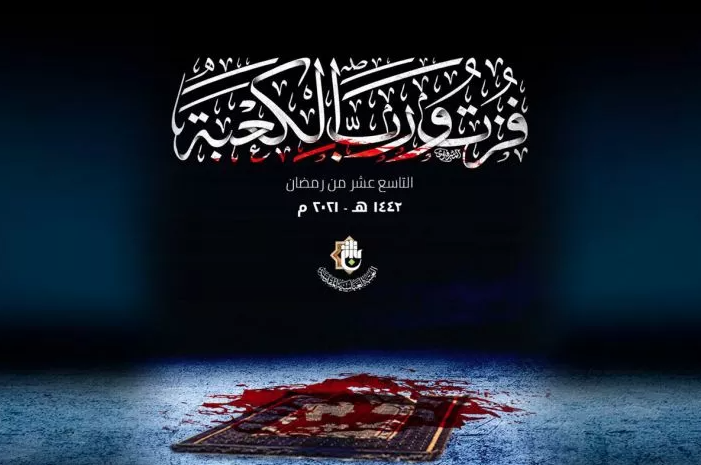 During that month of Ramadhan, Imam Ali (peace be upon him) was alternately going to the houses of his children and that of `Abdullah ibn Ja’far to break his fasts. His appetite had gone down very much and he used to take only a few morsels of food. When asked about it, he would say: “I wish that when my death comes, I should be on an empty stomach!”

On the night of 19th Ramadhan, the Imam (peace be upon him) went to her daughter Ummu-Kulthūm’s house. She offered him two breads of barley, a bowl of milk and some salt. When he saw the food he said, “In following the footsteps of the Prophet (Allah’s prayers be upon him and upon his holy Household) I have never had more than one type of food on my spread. O, Daughter! There is accountability for the legitimate and retribution for the illegitimate. Do you want your father to stay longer at the station of accountability of the Day of Judgment? Remove one of the two things from the spread!”

Ummu-Kulthūm took away the bowl of milk and the Commander of the Faithful (peace be upon him) ate a few morsels of the bread with the salt. After the meal, according to his practice, he stood up on the mat to offer his prayer. But he was looking up repeatedly at the twinkling stars and said:
“By Allah! I am not lying nor am I making a wrong statement! This is the night about which promise has been made to me!”
In uneasiness he sometimes recited Sūrah Yasin, sometimes he said “We are Allah’s and to Him do we return,” and sometimes “There is neither might nor power save with Allah, the Most High, the All-great,” and “O Allah! Make death felicitous for me!” When Ummu-Kulthūm saw this, she asked, “Father! Why are you so worried today?” He replied, “I have the Hereafter in front of me! I am going to the Presence of Allah!” Tears welled in the eyes of Ummu-Kulthūm and she said, “Father! Today you should not go to the Mosque! Ju`dah ibn Hubayrah is there. Ask him to lead the prayer!” The Imam (peace be upon him) said, “There is no escape from the Fate fixed by Allah” The night was in its last stages when the Muezzin, Ibn tabaj came and informed about the prayer. The Imam (peace be upon him) rose to move towards the mosque.

When he came to the courtyard of the house, the domesticated geese started shouting and swaying their wings. Someone wanted to move them aside, but the Imam (peace be upon him) said, “Leave them alone! After a short time the sounds of crying and wailing would start” Imam al-Hassan (peace be upon him) or Ummu-Kulthūm said, “Father! What sort of things you are saying today!” He said, “This is the truth that has come out of my mouth!” Then the Imam (peace be upon him) told Ummu-Kulthūm, “My daughter! These birds cannot speak! Take care of feeding them! If you cannot do that, then you must free them so that they find their food by going around on the earth!” When he reached near the door, he tied a shawl around his girdle and recited two couplets of Ruhayhah al-Ansari:

Fasten you riddle for the death
Because the death is coming before you
When death comes
Do not show unease!

Ummu-Kulthūm bid adieu to her father with tears in her eyes. Imam al-Hassan (peace be upon him) wanted to go to the Mosque with the Imam, but he asked him not to come. When he reached the Mosque, there was darkness there. He offered a few genuflections of prayer in the darkness. After reciting the supplications, the reddish dawn was around. He then went to the place from where the Adhan is sounded and called the Faithful to prayer! This was the last time that his voice resounded calling the people to pray and was heard in every household of al-Kūfah. Then he went round calling “Come to prayer! Come to prayer,” waking people for the prayer. Among these people was Ibn Muljim as well.

The Imam (peace be upon him) found him sleeping face down and said, “This is the way the Satan sleeps! Sleep on your left shoulder which is the way of the believers or sleep on the right shoulder that is the wont of the scholars, or sleep with you face up that is the way the Prophets sleep! Get up and pray. I know with what purpose you have come here and what you have hidden under the lapel of your cloak!”

This sound shook up the people of the city of al-Kūfah. People started arriving at the Mosque in hordes. Imam al-Hassan and Imam al-Hussayn ran towards the Mosque in panic where the people were crying inconsolably and were shouting, “The Commander of the Faithful has been martyred!” The sons of the Prophet (peace be upon him) went forward and saw that the arch of the Mosque was immersed with blood and the Imam (peace be upon him) was restlessly turning on the floor in blood and dust. He was picking up the dust from the floor, putting it on his injured skull and reciting the following verse:

The Commander of the Faithful (peace be upon him) suffered from that evil and poisonous strike three days and nights, while angels in the sky buzzed with supplication, and a black wind blew and made the world dark and gloomy, and Gabriel (peace be upon him) called between heaven and earth with a voice heard by every awake person:

“By Allah, the pillars of guidance have collapsed. By Allah, the stars of knowledge of all the prophets are no longer lit, the signs of piety have disappeared. By Allah, the ropes to God [orwat-ul-wothqa] are unravelled. All because Prophet Mohammad’s cousin, the chosen Way, Ali the Mortadha has been martyred. By Allah, the Master of guardians was killed by the most miserable of all.”