The Secretary General of the Holy Shrine of Imam al-Hadi and Imam al-‘Askari (peace be upon them) honors the servants of Aba al-Fadl al-Abbas (peace be upon him). 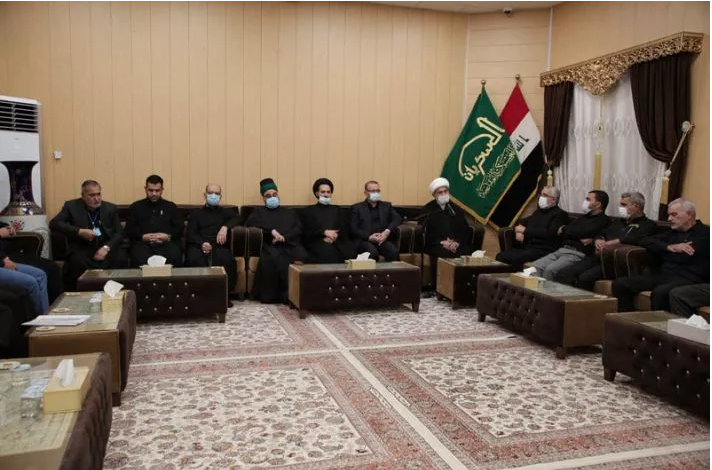 The ceremony was attended by a delegation including the member of the board of directors of the al-Abbas’s (p) Holy Shrine; Mr. Mustafa Dea-Uddin, the official of the Sayed servants’ division and the assistant head of the Department of the Hussayni processions and organizations in the two holy shrines.

This ceremony was held in appreciation of the efforts made by the participants during the mentioned Ziyarat, from the holy shrines of Imam Ali, Imam al-Kadhem and Imam al-Jawad (peace be upon them), Masjid al-Kufa, the Shiite shrines, and the al-Abbas (peace be upon him) Fighting Squad.

During the honor ceremony held in the protocol hall, Sheikh Al-Morshedi praised the efforts of the participants who provided all services and support to the departments of the holy shrine of Imam al-Hadi and Imam al-‘Askari (peace be upon both of them). And he prayed for all who contributed to the success of this blessed service.

It is noteworthy that the al-Abbas’s (p) Holy Shrine has participated in supporting the efforts of the Holy Shrine in Samarra, by providing a range of security, service and medical services, in a way that strengthens relations and cooperation between the holy shrines, and achieves common goals at all levels, including providing the best services to visitors of these holy places.