This type of perfume is used to perfume the shrine of Imam Hussain (PBUH), and other types are used to scent the holy dish and the hallway for the visitors. 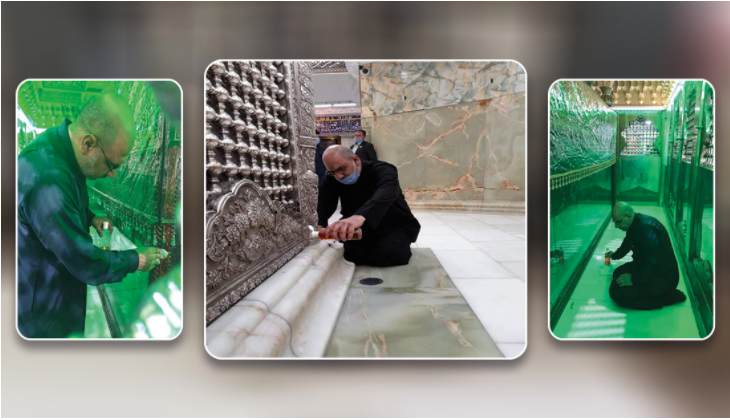 The official of the Perfumery Division of the Department of Preserving Order at the Holy Hussaini Shrine indicated that the Division uses special and distinctive types of perfumes to scent the shrine of Imam Hussein (peace be upon him), the Hussaini dish, and the hallways of visitors.

He explained that “the scenting process of the shrine of Imam Hussein (peace be upon him) is carried out by manual methods, as the workers in this division at the end of each month scent the shrine from inside and outside in conjunction with the opening of the honorable window for the purpose of carrying out maintenance work and electricity maintenance while removing dust and dirt from the holy shrine of Sayed The martyrs (peace be upon him). “

He added, “We use two types of perfumes to scent the holy shrine from the inside, one (the Prince’s group) and the other (Fatima) perfume, indicating that these perfumes are natural and concentrated that lasts for a long time and are mixed by specialists in the field of perfumery.”

He continued, “There are several donors who love Imam Hussein (peace be upon him) who give a group of perfumes and are used in the Holy Husseini dish, and the rest of the sections of the Holy Hussaini Shrine, including (Al-Danhal Al-Ahmar) and another distinguished group called (Al-Tal Al-Zeinabi) with another type called (Al-hafok) ) And (The Red Rose) and is distributed on the corridors of the Haram, religious schools, visitor cities, and others. “

It is noteworthy that the Perfuming Division affiliated to the Department of Preserving Order at the Hussaini Shrine aims to scent the grave and the blessed shrine of Imam Al-Hussein (peace be upon him), in addition to equipping spray fans, which are supplied with water and special perfumes at all entrances and exits to the holy Hussaini shrine and the main streets leading to the shrine of the Master of the Martyrs (on him Peace).