University students celebrate their graduation at the shrine of Aba al-Fadl al-Abbas (AS). 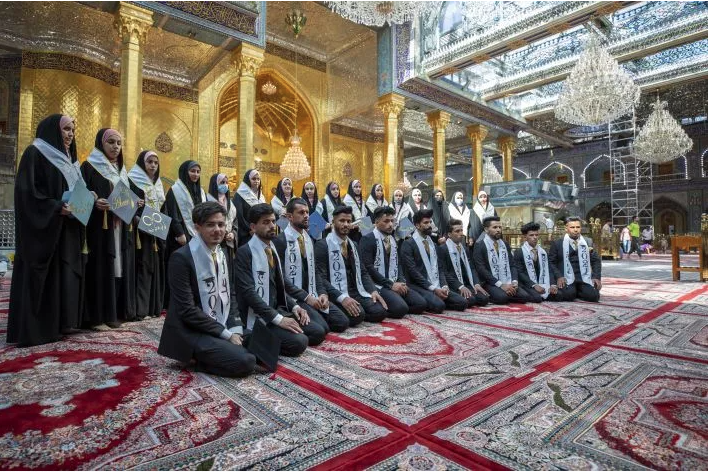 A group of graduates of the College of Science/Department of Physics at the University of Al-Muthanna celebrated their graduation at the shrine of Aba al-Fadl al-Abbas (peace be upon him), within the program of the University and School Relations Division of the Department of Public Relations at the al-Abbas’s (p) Holy Shrine, which is dedicated to celebrating this year’s graduate students.
Mr. Muslim Aqeel, from the aforementioned division and one of the supervisors of this program, explained to Al-Kafeel Network that: “The al-Kafeel National Youth Project, which is considered one of the most important projects adopted by our division, includes a number of programs concerned with university students and their environment, such as the celebration of graduate students. Every year we receive groups of the graduates at the al-Abbas’s (p) holy shrine, where they perform their oath.”
He added: “In continuation of this program, we received today a group of graduate students from the Physics Department of the College of Science at Al-Muthanna University. After receiving and welcoming them, they performed rituals of Ziyarat and supplication at the holy shrine of Abu Al-Fadl Al-Abbas (peace be upon him). )”.
After that, the students headed to Al-Qasim Hall (peace be upon him), where a festive event was held for them, beginning with the recitation of verses from the Holy Quran, and then an instructive lecture delivered by Sayed Mohamad Abdullah al-Mosawi form the Department of Religious Affairs at the Holy Shrine, in which he extended his congratulations to them, and draw their attention to a number of points, which are:
– Striving to seek knowledge, and not to stop at this level.
– Encouraging reading, and make the book a companion, and benefiting from it to increase their cultural and intellectual balance.
– Set a good role model that is worthy of trust for every student to follow in his life.
– Learning religious sciences, especially Islamic sciences.
– Following the example of the biography of the Imams of Ahl al-Bayt (peace be upon them), adopting their morals and working to reflect it positively in scientific, home and community life.
– Always striving for self-development and advancement.
And Aqeel said: “There was also a speech for the graduating students, delivered on their behalf by the student, Rajaa Ibrahim, in which she thanked and praised the al-Abbas’s (p) holy shrine for giving them the opportunity to celebrate their graduation in this holy place, which is a moral honour for these students and the turning point of their path after graduation.

After that, congratulatory gifts were distributed to them from the holy shrine, to conclude this program by performing the Ziyarat rituals at the shrine of Imam al-Hussayn (peace be upon him), and the blessing of lunch at the host restaurant of the al-Abbas’s (p) holy shrine.